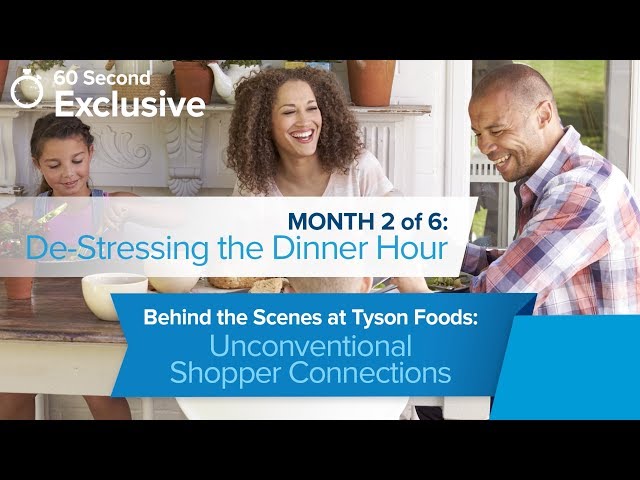 In this, the second month of Tyson Foods' "Unconventional Shopper Connections" experiment, our ten participating shoppers did not waste any time getting to the heart of the issue – prepared foods are simply not in their consideration sets. While they admitted they idealize dinnertime, wanting it to be a relaxing time to unwind or bond with families, they also generally confessed, as revealed in our Exclusive :60, that dinner usually turns out to be stressful and unrewarding. Yet, even when in a pinch, they disclosed that prepared foods are not top of mind as a bail out. While most saw our departments' products in favorable light, they didn't think prepared foods were for them.

This isn't the first time we've seen this kind of disconnect between how shoppers perceive prepared foods and the view we have from retail's perspective. In several Tyson Foods studies1,2,3,4, shoppers admitted their purchasing behaviors were negatively impacted by the old broken deli concept that promoted individual products or the value proposition and which did nothing to help them create satisfying meals that their families would actually enjoy.

The ten participants in the Unconventional Shopper Connections experiment generally agreed: When it comes to prepared foods, it's all about looks. Perceptions of freshness, taste, and flavor drive purchases. (So, good execution matters.) But they also said they would like to see more kitchen hacks for protein. That means they crave some creative inspiration for new ways to incorporate rotisserie chicken, for example, into easy meals that feel planned out and made from scratch. They'd also like some suggestions about how to use leftovers to make meals that feel like something new.

With Prepared Food, it's all about LOOKS

And, that brings us to this month's Exclusive :60 video series. Specifically, this episode's goal is to examine opportunities for retail to become more of a regular "go to" mealtime solution as well as a top-of-mind option when the family dinner plan falls through.

In this month's Exclusive :60, we'll learn what triggers dinnertime stress for ten shoppers participating in the yearlong experiment, "Unconventional Shopper Connections," and why they don't turn to prepared foods when the going gets tough. Learn more about "Unconventional Shopper Connections" check out More exclusive industry content, and connect with the Tyson Retail Foodservice team to find out more about how Tyson Foods helps grow the prepared foods business for our customers at the speed they need, in a direction that makes an impact.