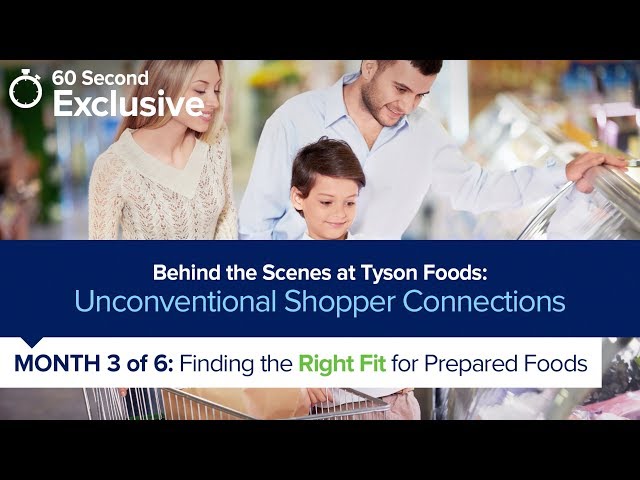 If there were a pecking order of "go to" foods for the family meal, would it surprise you to learn that prepared foods didn’t even make the top three? In the third month of Tyson Foods' "Unconventional Shopper Connections" experiment, ten participating shoppers reveal early memories around food and cooking, what they think of prepared foods and how they define being a "hero" (or zero). We learn that while they largely view them in a positive light, few think of prepared foods as a good fit for their lifestyles. They are much more likely to turn to fast food, takeout or the freezer and admit there is a "disconnect" in terms of who prepared foods are "for."

We've heard similar reports of a disconnect with the deli from participants in past Tyson Foods studies1 in which shoppers often stated they simply didn't think of incorporating their grocer's prepared foods during meal planning or turning to our departments as a last minute solution when there is no plan. One examination of shopper awareness trends2 found that less than ten percent typically think about purchasing from their grocer's deli for their evening meal. But we also learned that retailers could influence those decision-makers and strengthen profit margins with pre-shop messaging that educates and inspires.

The Unconventional Shopper Connections3 test group helps augment our understanding of this trend in this month’s Exclusive :60. They explain how they feel like "dinner heroes" when they make meals from scratch, offer a main course and sides, make a healthy meal (that's also economical) or one that everyone likes. But they typically feel like "dinner zeroes" when they buy fast food or prepared foods to serve their families.

We should not overlook the detail that these shoppers think of fast food and deli foods in the same light, because their perception is that neither provides the satisfying experience of preparing the food in any way. They don't realize there are abundant possibilities to use prepared foods - with other ingredients from around the store - to create easy meals they can be proud to serve. Perhaps they've never received educational tips, point-of-sale recipes or been inspired with pre-shop messaging.

Herein lies our opportunity to connect with shoppers to show how prepared foods can be part of satisfying meal solutions that are also convenient for their busy lifestyles.

Positioning Prepared Foods as a "Go To" Solution