Inspire Your Shoppers for Meal Time 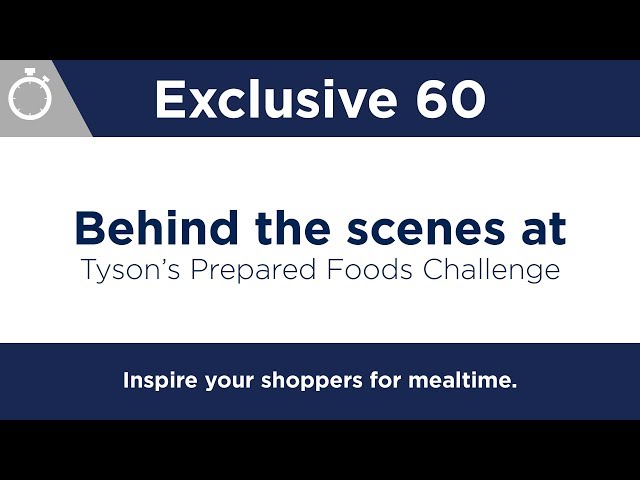 Over the past few months, we've followed families participating in Tyson Foods' Prepared Foods Challenge1 through our Exclusive :60 series. Making dinner every night for a week using prepared foods from local grocery stores, at first they met failure after failure, as they tried to assemble a meal without any real plan. Then, with the help of a chef, they learned how to create menus using their retailer's prepared foods with ingredients from other areas of the store, which they then prepared and enjoyed together.

Since it's not ideal to send a chef out to educate every shopper, Tyson Foods has also looked into other options for retailers to generate awareness and share chef-inspired meal ideas with their customers.

We examined shopper awareness trends,2,3,4 and found that less than 10 percent typically think about purchasing prepared foods from their grocer for their evening meal. But we also learned that retailers could influence those decision-makers and strengthen profit margins with pre-shop messaging that educates and inspires.

Furthermore, in Tyson Foods' On The Go Study2, consumers admitted that while meal planning is the key to maintaining a less stressful dinner hour, many actually make their dinner plan at the last minute for most of their evening meals. These short-term meal planners are looking for an eleventh hour solution but they often can't or don't know how to find it in their grocer's prepared foods department.

The answer to both issues - increasing shopper awareness and reaching the last minute decision makers - may lie in the effective use of digital media.

With more than 150 million active monthly users, Pinterest is a top platform for Internet users searching for recipe inspiration. Tyson Foods recently conducted a Pinterest campaign to test recipe pins. The impressive results demonstrate what a successful campaign promoting recipes using prepared foods could look like for a retail partner.

If you don't have a Pinterest presence, we have content that will help you get going. Meanwhile, we'd like to invite you to spend a minute with our families in this month's Exclusive :60, to learn how they gained new insights and used their store's 40,000 SKUs to create memorable meals. We'll also show you what inspired them to totally change their perspectives about their grocer's prepared foods offerings.