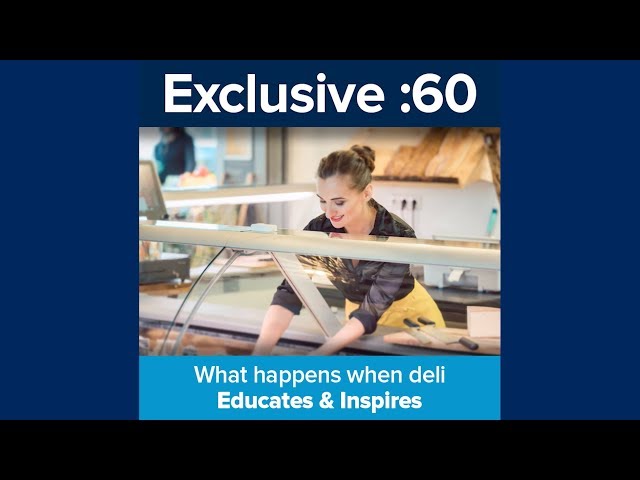 Has life’s hectic pace conditioned shoppers to think of food simply as fuel? If so, have meals become no more than sustenance and is deli only about convenience?

Back in the day, there was a science fiction TV show in which the starship captain would order a meal from the computer, and it would magically appear in a box, having been replicated from thin air. It seemed like a great idea, but on retrospect, the replicated food was never the focus of any episode. It was consumed, but rarely discussed or openly enjoyed. The food from the box was fuel, nothing more.

In this month’s Exclusive :60, we explore the notion that shoppers still want to serve meals their families will enjoy, but during the late afternoon dinner decision hour, they may not even consider the grocery deli as an option.4 This may be because their limited knowledge of deli has always been about the thing-in-a-box. They want to prepare a satisfying dinner but can’t imagine how to use deli to make the meal experience memorable.

Looking towards deli’s future, our direction should be to deliver the value shoppers deserve. It starts with good execution. We need to make sure products are ready at peak shopping times, signage is clear and appropriate and staff is ready to help. But we also must reach out to them during the afternoon dinner decision hour. The best way to get in the consumers’ consideration sets is by providing education and inspiration they need to incorporate prepared foods into a meal plan that leads to a satisfying dinner experience.

That’s why this episode of Exclusive :60 is delving into ways to engage with prepared foods customers before and after they enter the store. We must present fresh ideas that fit into their time-starved lives and diverse family dynamics. We need to do this because shoppers do think food should be more than fuel and meals are more than sustenance. We also need to ensure they know that deli offers much more than basic convenience. By inspiring them to use prepared foods to create meals they’re proud to serve, it can make a positive impact on their shopping behaviors, which can help lift sales, too.